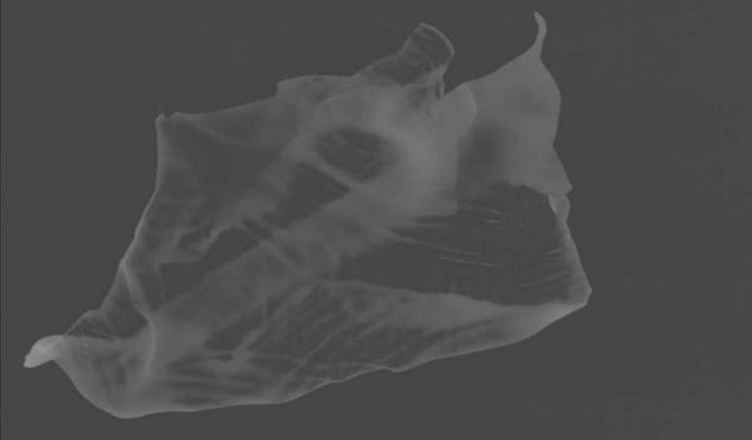 One pleasure of Nathan Brown’s The Limits of Fabrication is his descriptions of very cool technologies. Take “nano skin.” Comprised of “arrays of carbon nanotubes” embedded within a “polymer substrate,” nano skin can detect and transmit signals from the environment (47). It’s not much to look at—the photograph included in Brown’s text reminded me of polka dot scotch tape—but, as its developer Pulickel Ajayan argues, nano skin “constitute[s] a step toward the development of biomimetic sensors, since carbon nanotubes have the capacity to convert mechanical signals into electrical signals—one of the key functions of epidermal cells in plant and animal stimulus/response systems” (47-48). Nano skin is an inorganic material on the way toward behaving like organic life, not in sentience or self-organization but in dynamic, responsive relationality. When you touch nano skin, it touches back.

How might nano skin, along with other developing edges in experimental engineering, prompt us to rethink what we mean by materialism? By posing this question, Brown’s book extends and challenges the new materialisms that have been afoot for a number of years in literary and cultural studies, whether as object-oriented ontology, Bruno Latour’s actor-network-theory, or Jane Bennett’s vibrant matter. Protesting the linguistic and idealist tendencies of a critical theory that would forgo claims about nonhuman reality, the new materialists call for us to listen to the things themselves. Brown wants us to sharpen our ears even more, to listen to atoms and electrons. Contemporary nanotechnology’s fabrications at the atomic level, he argues, should prompt us to rethink our ontological categories. Nanomaterials erode the distinction between organic and inorganic, nature and design, representation and substance. These are some of the limits of Brown’s title, and it is among these limits that he seeks to develop a rigorous materialism, one that privileges practices of construction over representations of identity.

The other key term of his title, fabrication, allows Brown to make his perhaps most surprising, and at times precarious, move: from materials engineering to poetry. Fabrication is the common term uniting the atomic manipulations of nanotechnology with the linguistic configurations of post-World War II constructivist, materialist, projective, and (as Brown prefers to call it) objectist poetry. Materials science and materialist poetics are thus both “branches of materials research and fabrication” (10). Fabrication unites poiesis and techne, creation and construction. The objectist poetry Brown traces from Charles Olson into the present exemplifies this principle, foregrounding and complicating the relationship between materiality and representation, producing works wherein “text passes over into texture” (10). While Brown’s genealogy of experimental, constructivist poetry is certainly not new, the book offers a fresh theoretical reinterpretation of this tradition. Brown shows us how constructivist poetics and material fabrication mutually illuminate one another, and, in turn, suggest new pathways for materialist thinking. Nanofabrication is not simply a historical technocontext used to comprehend poems by Charles Olson, Christian Bök, Ronald Johnson, Caroline Bergvall, or Shanxing Wang. Instead, both poetry and nanotechnology are instances of fabrication approaching its limits, and Brown argues that those limits have significant implications for materialism as such.

The intellectual foundation for this argument is laid in the first two chapters, one philosophical, the other literary historical. Brown begins by presenting a theory of the “inorganic open,” a critique of the status of life in biopolitical thought. The privileged role of life in biopolitics begins, for Brown, with Martin Heidegger’s distinction between the worldlessness of physical being (think stones), the weak world of the animal (think your goldfish), and the world-making of the human (think your ability to think stones and goldfish). Giorgio Agamben later critiques Heidegger’s scheme by deconstructing the division between the animal and the human, showing that the animal participates in an “open” that becomes the condition for world-making. For Brown, Agamben ignores the possibility that inanimate physical being, too, could be environmentally entangled, participating in a world-making process. We simply aren’t looking closely enough at the dynamic relationality of atoms, and nanotechnologies sharpen our gaze by fabricating “physical materials that (to speak in terms of Heidegger’s determination of living being) are not-without-access to an environment” (46). Dynamic materials such as nano skin are inorganic and fabricated, yet sensing, responding, and adapting to environmental stimuli. Crucially, however, Brown does not take these new materials as an “expansion of the category of life, but, rather, a rethinking of physical being” (50). His rethinking deploys Jean-Luc Nancy’s model of world as an irruption between touching surfaces, a touching that does not rely on any essential distinction between the living and “mere” physical being. Instead, the world arises from the “spacing of physical bodies through the constitution of their limits, each in relation to the others” (55). This spacing is the “inorganic open,” which makes it possible to think material as essentially configured, simultaneously bounded and opened by “[threshold], surface, limit, edge” (55).

This theory of edgy physical being leads Brown to reinterpret Charles Olson’s claim in the influential essay “Projective Verse” that “man himself is an object.” Despite this clear affirmation of objecthood, many scholars have interpreted Olson’s poetics in organicist terms, stressing the living body and consciousness of the poet as the origin of the poem. Brown challenges this view through a careful rereading of Olson alongside his major philosophical influence, Alfred North Whitehead. In this reading, it is “physicality, rather than ‘being alive’” (64) that is at the heart of Olson’s manifesto. The projective poem is not an extension of the living being but the “composition of materials through relational processes” (69). Even those properties closely associated with the animation of life are caught up in this compositional, material process. Brown interprets Olson’s key concept of “breath,” for instance, as another example of a limit, a surface that shows “the non-coincidence of the body to itself, its participation in an outside” (75). The poem’s aesthetic energy thus arises as a manifestation of the ontology Brown pursues throughout his book, whereby the “being-open of any object [is] concomitant with its being-broken” (92). Or, in the spirit of fabrication, being-configured.

Brown’s reinterpretation of Olson’s “objectism” is probably the book’s most valuable contribution to poetic history and theory, but, by the end of the chapter, I found myself wondering what, exactly, constitutes a poem? What makes a poem different from any other instance in the “inorganic open,” wherein any given modality of matter is always already a field of surfaces in relation, simultaneously configured and broken? Brown indirectly answers these questions in the remaining chapters, which extend his theoretical work into close analyses of individual book-length poems. Chapter three takes up Johnson’s Ark through the legacy of Olson’s Black Mountain College colleague Buckminster Fuller. Unlike Olson, Fuller conceives of design as an abstract, idealized pattern working within both nature and human artifice. However, this ideology is torqued by the very materials themselves, which resist design’s tendency toward idealization. Johnson’s Ark, while attempting to adhere to an overarching architectural schema, is forced to adjust to the linguistic materials it encounters, thus revealing the edge or limit that emerges between “bottom-up and top-down processes of fabrication” (131). Chapter four moves from architecture to the messy relationship between the organic and inorganic, reading Christian Bök’s Crystallography and Caroline Bergvall’s Goan Atom as poems articulating “the synthetic climate of technoscience at the limits of fabrication” (158). Where Bök’s use of the crystal as a compositional and formal principle manifests a “subtractive” and “inorganic” model of objectist poetry, Bergvall’s is a “performative” objectism, which plays the capacities of the body as a feminist and queer object. In both projects, edges abound, either as the fractured border between Bök’s configurative and signifying language or as Bergvall’s celebration of the body particulate, a queer mobilization of multiple objects resisting identification.

The most compelling and problematic edge, however, emerges in the final chapter, when Brown turns to “the scale of a wound” through a reading of Shanxing Wang’s Mad Science in Imperial City. Wang, a nanoengineer turned poet, exemplifies the boundary between material fabrication and poetic configuration that animates Brown’s book. Topically, Mad Science moves from Tiananmen Square to 9/11, making the wound profoundly historical. Or, more properly, historical materialist, as for Brown the wound in Wang’s poetry is an instance of a “real abstraction,” a physical reality produced by the process of global capital exchange. Insofar as the material conditions of the world are configured by the political and imperial actions of both the Chinese and US states, a poem that articulates those conditions confronts the limits of representation: the real abstractions of the contemporary are precisely those things we cannot see, even with the maddest of sciences. For Wang and Brown, this blind spot is ultimately a problem of scale, recalling the nano’s invisible materiality. As Brown puts it, “Nanostructured materials serve as a synecdoche for the operations of an insensible power that cannot be ‘seen through’ because it is not seen” (233). The wound, then, is not simply the destruction of bodies in events like Tiananmen Square, 9/11, or the wars in Afghanistan and Iraq; it is also the invisible yet material operations of the real abstractions that constitute the historical. 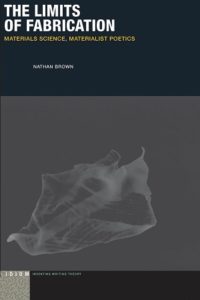 Not seen, and yet perhaps touched. The wound is a potent figure for the limits of fabrication. The historical, affective turn at the end of Brown’s book is something of a release after the somewhat stark and bare poetic ontology he explores. Nevertheless, the scale of the wound opened new questions for me, pointing to the limits of Brown’s own commitment to materialism. Can the inorganic open provide a way to adequately think the wound as such? What does it mean to speak of wounds without something like organisms? Or, to put it otherwise, can nano skin bear wounds? A wound is more than simply a tear or fracture; it is a body’s self-testimony to the fact that the world could have been otherwise, even hazarding a claim for that otherwise. The very concept of wound thus edges materialism toward a kind of idealism, troubling the distinction between descriptive and normative claims. In this sense, the capacity for wounding, the ability to be wounded, becomes a condition for politics. A poetics of the wound, in turn, might extend these ontological and political concerns into language itself. If, as Brown concludes, poetry may “open language upon its protosemantic dimension” and allow us “to abide within the indetermination of what we make” (247), then poetry, like every activity of “skilled making,” “is also a practice of making mistakes,” a “duplicity” “constitutive of fabrication” (247). Poetry as fabrication, like nanotechnology, both breaks and exceeds itself, and, in doing so, approaches the conditions of a wounded materiality. This rupture or edge isn’t fully addressed in Brown’s book, but that may be one of its lasting merits. The Limits of Fabrication opens new pathways for speculative and dynamic thinking precisely by illustrating how materialism itself can generate its own limits.

The Article can be found via the below link.

Paul Jaussen is an associate professor of literature at Lawrence Technological University in Detroit. His book, Writing in Real Time: Emergent Poetics from Whitman to the Digital was published by Cambridge University Press in 2017.