Master of Science in Electrical and Computer Engineering

Electrical and computer engineers combine their knowledge of science, mathematics, and engineering with problem-solving skills to design, construct, and maintain the vital products, services, and information systems that fuel our technology-driven world.

Many employers today believe a graduate degree is essential in order to succeed in this competitive and rapidly changing marketplace. Furthering your education can help you gain an expert level of technical proficiency, improve your marketability, and advance your career.

A robust OFDM System Simulator was previously designed by Dr. Jaber for a “rapid investigation into relative performance analysis” for Dedicated Short-Range Communication (DSRC) Systems; however, for large number of message packets sent, the simulation time would slow down as the simulator continued to run, consistent with a third-order polynomial function. Modified code was then designed by the students to parse (“start-stop-start…”) the simulator into iteration segments allowing the overall time for completion to be linearized. This improvement to the simulator creates the opportunity for a faster simulation testing experience. 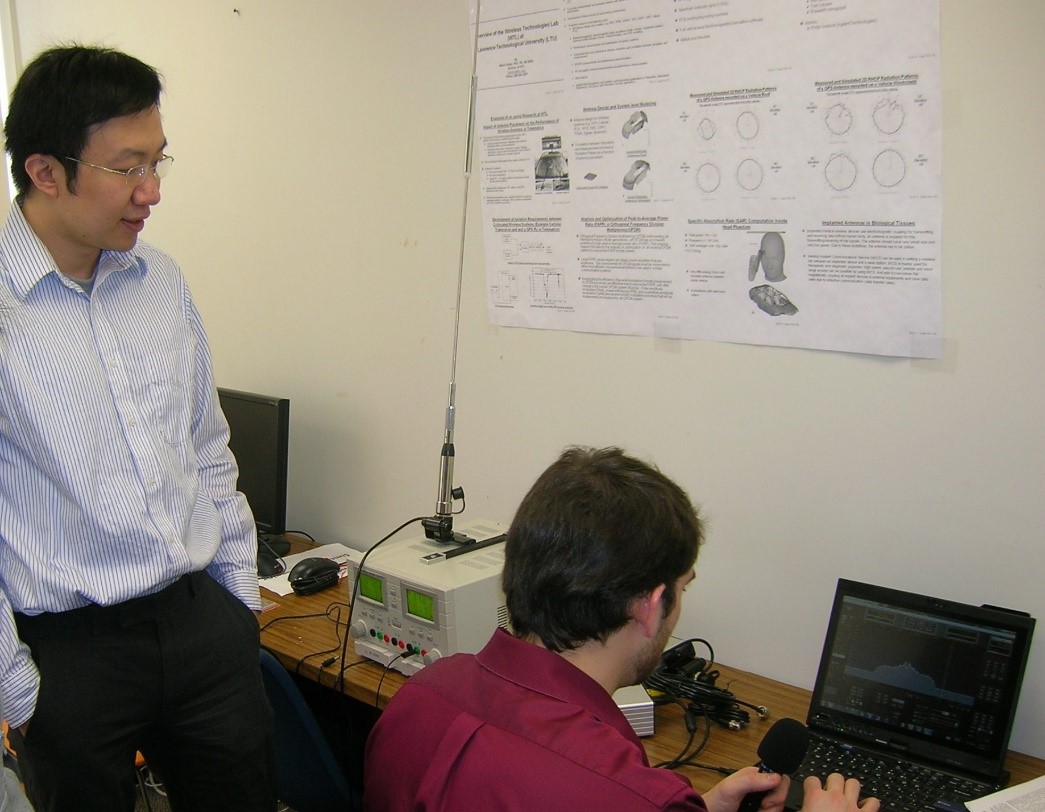 Graduate student Robert Reichel has worked with Dr. Kun Hua to develop an adaptive and robust software radio communication system in the lab of wireless communications.

The aim is to generate an automotive embedded system to scan commercial radio signals and automatically select a station that is currently playing music, sports, a talk show, weather information, etc. This would allow users to skip commercials and listen to preferred content continuously without having to manually scan for stations. The system is designed to perform real time analysis of an audio stream through pattern recognition, data mining, nonlinear optimization, signal processing, and embedded techniques.

“The emphasis on actually applying concepts is what makes Lawrence Tech’s engineering programs different from most – that and the professors. My professors all exude a certain vigor, as if my success is their number one priority – not only in the classroom, but also in my career”.
– Christopher Orr, electrical and computer engineering student

Students experience real world application of Computer Network Security at General Motor’s Research Center. During the tour, students were exposed to GM's High Voltage Battery Testing Lab Facility where they learned about lab integration of electrified vehicle propulsion systems. There are a lot of aspects that go into making the lab a safe and functional lab work environment. In the lab, they experienced integration of networking and network security, electrical and computer engineering design, environment control systems and test automation, data acquisition and data analysis, and hardware/software communications. One of the students commented: “I want to personally thank you Dr. George Pappas and our class group for the respect and behavior that you have shown during the tour. You guys were very professional and polite compared to the other group(s) that were attending.”
– Michael Holland, ECE Graduate Student

"In the residential sector, there has been an increase of energy demand from a growing population, and the adoption of a higher number of energy consuming devices. Technology is quickly reacting to the need for more energy in the consumer sector by developing smart devices that are more energy efficient; however, in order to improve overall efficiency and reduce energy charges from the utility company, the consumer needs to be aware of their energy consumption per device being used intentionally or unintentionally. A smart meter is a device that can measure the consumption of energy and provides this information to the consumer and the utility company. The students developed a communication system device using a Particle Photon microcontroller that alerts the consumer of opportunities to become more efficient with their energy usage by tracking the energy consumption from devices whether being used or not. The system developed is wireless, expandable to be able to track energy use from any device, and will have a user friendly web interface where the consumer can make decisions based on their real time energy consumption.”

Option II: Coursework and Thesis
If a student elects to write a thesis, the core courses requirement may be waived at the thesis advisor’s discretion. This option requires 20 credit hours of a combination of any of the core and technical electives courses plus a ten-credit-hour thesis for a total of 30 credit hours. The student, in consultation with his or her thesis advisor, proposes a thesis topic by submitting the “Petition for a Master’s Thesis” form that describes the research topic in detail and presents the research plan. The thesis proposal must be successfully presented to the student’s thesis committee before the master’s thesis credits are elected. Once the thesis is accepted, the student can take any combination of EEE 6911, EEE 6912, and EEE 6913, to add up to the ten thesis credits. Once the thesis is completed, the student must successfully defend it before his or her thesis committee.


The following Master of Science in Computer Science (MSCS) degree electives may be used as technical electives with the advisor’s approval. (The prerequisites for these courses are listed in their course descriptions.)

For details on LTU's MSECE curriculum and other MSECE-related information, click the button below to download the MSECE student handbook. (link of MSECE handbook attached here)

During the course of study, students are expected to:

“An MWSN combines vehicle-to-vehicle and vehicle-to-infrastructure connectivity to give drivers 360-awareness of their surroundings,” said Kun Hua, professor of electrical/computer engineering. A number of courses and labs in all three departments will provide students with the knowledge needed to conduct the research.

According to the National Highway Traffic Safety Administration, 5.7 million traffic accidents occurred in 2013 resulting in more than 32,700 fatalities. Intelligent traffic systems, like the ones the students are developing, will improve safety. In addition, information about road conditions and traffic congestion that will be transmitted to drivers also could improve traffic flow and reduce fuel waste. 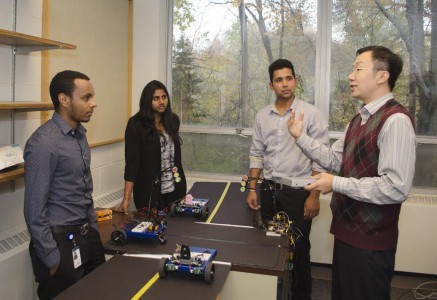 Abstract: In hands-free mobile communication, speech quality is often degraded due to presence of surrounding noise. This paper introduces an improved version of Minimum Mean Square Error (MMSE) noise estimator. Noise spectrum estimation is a crucial element used in speech recognition systems. Our proposed noise estimation method is based on a popular searching algorithm used in software engineering called Binary Search (BS), which we integrate with First-In First-Out (FIFO) MMSE noise reduction algorithm. In the literature, there is no research addressing the integration of BS algorithm with an active noise cancellation system. The noise spectral minima are computed using BS algorithm which makes it fast and efficient. The proposed algorithm is tested using real time data collected from vehicles running at different speeds. Simulation results are provided, and it is shown that the proposed algorithm outperforms other MMSE algorithms. Link here. 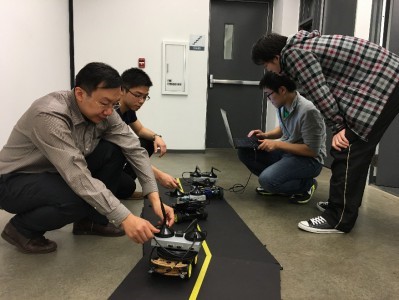 Admission to the Master of Science in Electrical and Computer Engineering program requires:

Applicants who do not meet all of the conditions for regular graduate admission may be considered for provisional admission by the Graduate Admissions Committee, provided they demonstrate an exceptionally high aptitude and promise for doing graduate work in this area and hold a Bachelor of Science degree in electrical and computer engineering.

Additionally, the academic background of candidates will be evaluated by the Graduate Admissions Committee as part of the admissions process. Students found deficient in a particular subject area are required to enroll in pre-core crossover courses before being allowed to enroll in some of the core program courses. No graduate credit will be granted for these courses.

for undergrad and graduate